When my 18-years-old daughter was home from college recently, I noticed that she has become extremely germ phobic. This makes sense given that she is currently studying microbiology and is more aware of the ubiquity of microbes in the environment. But her behavior seems excessive. She washes her hand frequently which is not such a bad thing but she is doing this as much as 10-15 times in an hour and she also showers three times a day. She wears a mask while holding her year old baby brother (okay, I’m not too concerned about this because it’s probably a good safety measure) and when she does any cleaning at all around the house. Even for common activities like using the television remote control or opening the front door, she uses disposable gloves.

I’m worried that my daughter has or is at risk of developing OCD. Can you please explain how OCD works and what are my options in terms of helping her live a normal life?

This may be a temporary reaction to her new knowledge of germs but if the behavior persists, please consult a therapist for professional diagnosis and discuss the options for treatment.

I will explain the mechanics of Obsessive Compulsive Disorder (OCD) and one potential treatment based on studies conducted by the University of California Los Angeles psychiatrist Jeffrey M. Schwartz.

As per Dr. Schwartz, OCD occurs when there is a problem in the region of the brain that is responsible for steering a person from one thought topic to another. In people with OCD, the caudate nucleus, also referred to as the “automatic gearshift” of the brain, gets jammed.

Before the caudate nucleus gets the signal to move on, however, there are a few other things that happen: 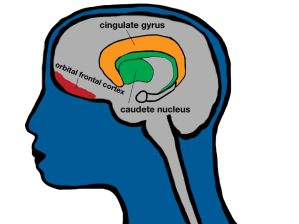 In someone with OCD, step #3 does not occur so steps #1 and #2 continue to occur in an infinite loop. In a non-OCD brain, all three steps occur and the brain’s organs return to their normal state.

Dr. Schwartz has developed a system which helps an OCD patient to break out of the infinite loop by causing step #3 to occur. His treatment encourages the caudate nucleus to move the person onto a different thought so that they break out of the compulsive cycle. His cure uses the theory of neuroplasticity. Neuroplasticity refers to the brain’s ability to weaken old neural circuits and develop new ones. It is similar to un-learning a behavior and learning a new one. In this case, the behavior applies to the neural synapses in the brain, that is, the brain circuitry forgets an old pattern of behavior and learns a new one.

The way that the treatment works is this:

As the patient repeats these steps, new connection form between the brain synapses and the old ones weaken and the brain does not get stuck in the infinite loops of steps 1-2.

In many ways, the concept of neuroplasticity is similar to unlearning bad habits and learning new ones, just a new spin on the concept of practice makes perfect. Neuroplasticity is not just about unlearning but it’s also about learning, i.e., creating new neural circuits. Thus it can be used to not just cure problems but also to learn new concepts regardless of the age of the brain.

It is possible that your daughter is already aware of her compulsive behavior. If not, I hope you are able to make her aware of her issues by pointing out the behavioral examples that you have given to me. Once she acknowledges her problem, you can show her this column to help her understand what is happening in her mind and one possible solution. Ultimately, however, a diagnosis and treatment should occur under the care of a professional therapist.

This monthly column is published in  SynchChaos.com magazine. Leena Prasad has a writing portfolio at http://www.FishRidingABike.com.

Dr. Nicola Wolfe is a neuroscience consultant for this column. She earned her Ph.D. in Clinical Psychopharmacology from Harvard University and has taught neuroscience courses for over 20 years at various universities.

Taking a journalistic microscope to the brain, I read a lot about the nervous system and try to distill the information in a simple format.